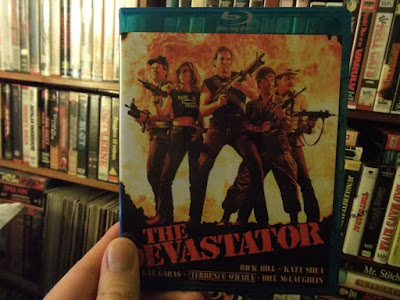 I own Cirio H. Santiago's THE DEVASTATOR (aka The Destroyers) on old ex-rental VHS but today I also received the new(ish) Code Red blu-ray (from 2017). I watched it right away and the print looks great. The disc also has a rather long interview with Terrence O'Hara (20 minutes) who was in the film, info from Katrina Leigh Waters, and the film's trailer. Good stuff  ^_^

Check a more thorough walk thru of the blu-ray on here.


Here's Bert Spoor talking about working on the film. It's from an old interview from Search My Trash site:

"The Destroyers, my first shoot with Cirio - I guess he liked my way of dying, because in this movie I probably died 4 or 5 times. And once I came pretty close to an accident. We were playing a couple of outlaws, defending our marijuana plantation!!! In one scene I was trapped, a booby trap was placed beneath a tree with a hanging rope, ending in a loop, I hook my leg and go face down, the camera stops rolling and my foot is placed in the loop. Camera rolls again. There were a couple of guys, pulling the rope, but with too much horse-power, I ended off-frame way too high. It had to be done again, and I was placed in position again, and "Action!"

And up again, at the right height this time, but I was moving and swinging too much, and Cirio wanted a 3rd take...

But half-way the 3rd take I went back down with the same speed as I got up. I hit the ground but was able to break my fall, the knot in the rope didn't hold and slipped. All four guys were down on their asses as well. I was furious, and told the director to find another stuntman to finish the take, I didn't feel much like hanging up side down again, well, they found me a double to finish the shoot. They placed a bamboo frame (having sharp spears in it) around his body.  I didn't know what was going on and asked someone what they were up to. I was told the booby-trap had a follow-up. This bamboo frame was supposed to pierce the guy as it swings down. Now it will be filmed backwards and later edited the reverse way. The same guys, holding the rope with the bamboo frame were to do the job again. On action they pull their asses off, and believe it or not, two of them slipped, and the bamboo frame went back all the way it came, the move came to a hold only inches before it was to hit the hanging man. My stomach turned: I was supposed to be hanging there, if I had, would the frame have missed me ????"