I've just found out IFD has opened an official YouTube channel. They have uploaded a ton of their trailers in good picture quality and many of them even in their original aspect ratio. Here's a trailer for one of the few war flicks on the channel, MISSION INFERNO. I reviewed the film for my old fanzine more than 15 years ago and I'm sorry to say but it is a piece of shit and I never wish to watch it again. However, if you hate yourself and life in general I suggest you go ahead and waste an hour and a half on it. The full film on YouTube.

Apparently, this international release from IFD is a cut and paste job. For info on the original films check Kommanditist38's info in the comments section to my original post (from 2010!) here.


For the film's credits on IMDb go here. 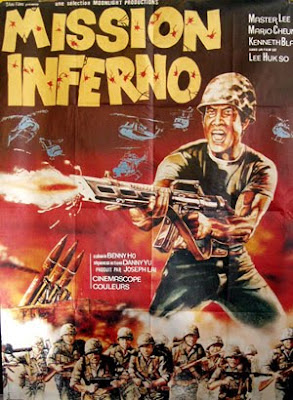