20 minutes ago I was checking the web to see if any labels had been so kind as to release a blu-ray of Joe D'Amato's highly entertaining TOUGH TO KILL (aka DURI A MORIRE, Italy 1978 - or 1979 depending on which website you check) but nope, nothing, zilch, nada!

I can't belive it's been 10 (ten!!!) years since I posted about a crappy American dvd release of the film!!! (link to the old post here). Fred Andersson - Ninja Dixon, Simon - Explosive Action, Paul Cooke all commented on that post. And we STILL haven't got a proper release!!!

Anyhoo, instead of finding a blu-ray I discovered that the crappy "widescreen" print from the dvd is now on YouTube and so I might as well post it here. Quotation marks cos I'm pretty sure they've made it to look like letterbox by covering up some "foreign" subtitles. Maybe they used one of the Scandinavian video releases for their dvd, or the Japanese tape. My own vhs is from Greece but from memory I seem to remember it's fullscreen.

I looked up the film and apparently it had a cinema run in Denmark in late 1979 as Selvmordspatruljen [Suicide Squad].  Check the old post for the Danish trailer.  I found an ad-mat for the film in the Ekstra Bladet newspaper from November 12, 1979. 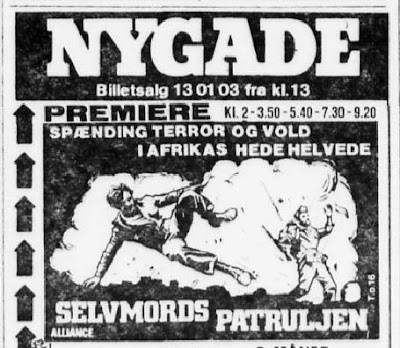 Labels: TOUGH TO KILL - full film, Tough to Kill (It)